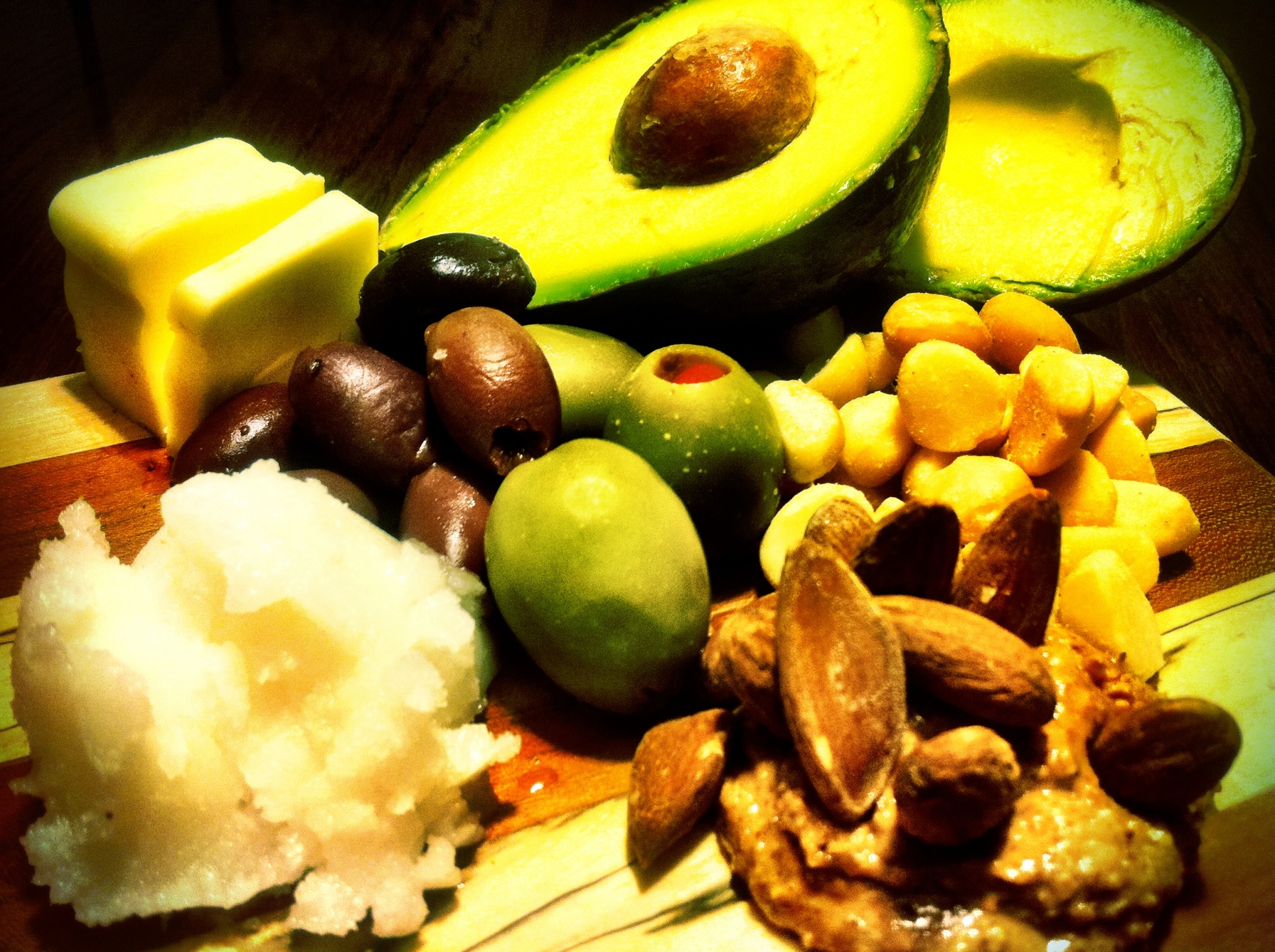 Fat is an absolutely essential part of a healthy diet, especially for an athlete at CrossFit Impulse. But all fats are not created equal. I’m going to break down the three different types of fat, give examples of each, and tell you the proper place of each in your CrossFit diet. Then we’re going to geek out a little and learn what makes different types of fat different.

First, let’s dig into the word “fat.” Depending on the context, “fat” can sometimes mean “adipose tissue,” the soft stuff that hangs onto your love handles and makes a ribeye tasty. It can also mean “fatty acids,” a group of chemicals that have the same basic structure. When you see the word “fat” in this article, it refers to fatty acids.

You know saturated fat from animal flesh, dairy products, and coconut. They’re usually solid at room temperature (think butter, coconut oil, and the gristle on the edge of your steak). How much saturated fat should you eat? Thirty years ago, anybody would answer that question: “As little as possible!” But now we know that’s not the full story. Contrary to what we’ve all been told, there is no widely-accepted scientific link between saturated fat and heart disease. Studies so far have never adequately controlled for other dietary and lifestyle factors. Current thinking on saturated fat by itself ranges from neutral to wildly beneficial. Saturated fat from animal products is packed full of nutrients like Vitamin A, D, K, and E. You shouldn’t get 100% of your fat intake from saturated fat, but you don’t need to be scared of saturated fat either—if, and that’s a big “if,” the rest of your diet is in check. That essentially means your carbs all come from fruits, vegetables, and sweet potatoes. One thing we do know for sure is that a diet high in saturated fat and simultaneously high in poor carbs like grains and sugars…well, that’s a recipe for an early grave.

Conclusion: If you eat a low-moderate carbohydrate diet and get most of your carbs from quality sources, then saturated fat can be an important part of your diet.

Conclusion: Monounsaturated fat is clearly a friend. Strive to make it the primary fat in your diet.

Polyunsaturated fat is like a child that is still thumb-sucking at the age of ten. It has some complex issues, and is very awkward to discuss. See, I can’t honestly say that you need to completely avoid polyunsaturated fat, which is my inclination. Many polyunsaturated fatty acids are essential to your health, including those in fish oil! But the majority of places you’re likely to encounter large quantities of polyunsaturated fat in the grocery store are bad news. These  exceedingly poor sources are  vegetable oil, corn oil, sunflower oil, margarine, soybean oil, Italian dressing, and others.  Let me be clear, you would do better to light up a turd and smoke it like a cigar than to eat those polyunsaturated fat sources.

Conclusion: If you’re eating quality fat sources like nuts and fatty fish, and supplementing with fish oil, then you’re going to get all the polyunsaturated fat your body needs. No need to seek out more. Avoid most sources of polyunsaturated fat at all costs. They are like people who back into parking spaces: suspicious, and not to be trusted.

Interested in exactly what makes one fat different from another? You don’t need to understand this section to make good food choices, but understanding certainly helps, so read on and explore the science of what you eat.

Yes, my illustration looks a little like sperm. Moving on… All fatty acids start with a particular type of acid on one end and then have a tail of Carbon atoms. This Carbon chain can be long or short. Each of these Carbon atoms is bonded to at least one Hydrogen atom. When all of the Carbon atoms are filled with all the possible Hydrogen atoms they can hold, this is known as a saturated fatty acid. The chain is “saturated” with hydrogen atoms. Makes sense, right?

It’s all those Hydrogen atoms that make saturated fat solid at room temperature. They also protect it from going rancid through oxidation. If all the available bonds are occupied by Hydrogen, then Oxygen from the air can’t get in and spoil it. That’s why a bowl of bacon grease solidifies, and can then be left on a counter and safely used for cooking days or even weeks later!

Sometimes we find a place in the Carbon chain that could hold another Hydrogen atom, but it’s not. In this case the fatty acid is not “saturated” with hydrogen atoms. It’s “unsaturated.”

So now we have the three different types of fat: saturated, monounsaturated, and polyunsaturated. The difference between them is simply how many Hydrogen atoms are hanging on wherever a slot exists. It’s also these Hydrogen bonds that give fats their unique properties. Cool, huh?!?

And by the way, chemistry majors, I know that’s not the absolutely correct way to present that information. However, it’s a way that normal people might be able to understand. Deal with it.

8 thoughts on “The Skinny on Fat”